Caught on CCTV: 17-Year-Old UP Girl Thrown from 2nd Floor by her Alleged Harassers 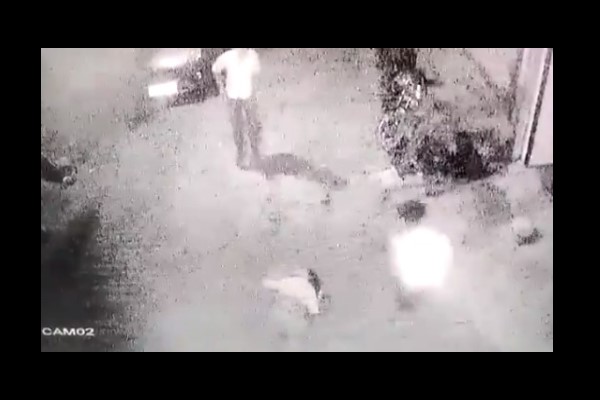 A hair-raising footage has been caught on CCTV where a 17-year-old UP girl can be seen thrown out from the 2nd floor by her alleged abusers. The footage shows the girl falling on the road with a thud who was allegedly flung from her home’s balcony on the second floor. The video also shows concerned people gathering after her after the fall.

A 25-second-footage has been making rounds of social media in which a minor can be seen thrown on the road with a loud thud, depicting a strong impact. The fall was so violent that on focused observation, one could see that her hands are flung outwards and go beneath her neck.

A 17-year-old girl #thrown down from the terrace of her second floor house in #Mathura by 3 youths who had been harassing her for the past one year. The victim in the hospital with fractured spinal cord. @mathurapolice @Uppolice @adgzoneagra pic.twitter.com/gtJTjClEbq

The video also shows two men escaping and a few passersby gathering around her.

According to the reports, the 17-year-old girl survived the assault but with such a fall, her spinal cord got badly injured. Another visual was also shared after the incident in which the survivor of the assault was lying on a hospital bed.

Although the story is developing and updates will be awaited, so far it has been revealed that the survivor’s father has filed a First Information Report (FIR) against 3 men who all live close to the survivor’s locality. As per the father of the survivor, the men had been stalking the teen in the past few months.

As per the FIR, reported by NDTV, the father has claimed that he received a phone call from one of her daughter’s stalkers on the night of June 21, Monday. The man demanded to speak with the daughter and on her father’s refusal, the man allegedly started to abuse him.

Later, on the same evening at 8 PM, 3 men forcefully entered into their home and sexually molested the 17-year-old girl and tried to kidnap her. On the family’s shouts and their vocal resistance, the alleged accused flung the teen from the balcony that was on the second-floor of her home. The CCTV footage also shows the men entering into the residence of the family of the survivor.

“Asked by police to come next day”: Family alleges

A report from ABP claims that the family of the survivor also went on to allege that when they reached the police station on Monday to register a complaint regarding the situation, they were asked to come the next day. Meanwhile, Superintendent of Police Shrish Chandra claimed that the girl’s family lodged a written formal complaint on Tuesday morning at the local police station. After the formal complaint was accepted, a FIR was lodged.

After being rushed to the hospital, the girl’s father, Prem Pal Singh was quoted by PTI saying-

“She is admitted to a private hospital and has got severe injuries in her spinal cord and other parts of the body. She is in a critical condition.”

After the FIR was lodged, the Mathura Police have arrested two of the three accused in the matter.

“We have registered an FIR and two men have been arrested. We are investigating the case and will take the strictest possible action,”