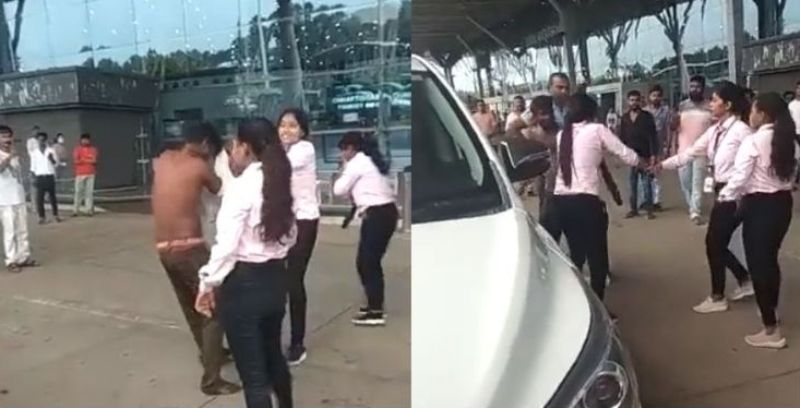 In a horrific incident reported from Raipur, a group of women were seen thrashing an auto driver with belt & slippers at the city’s international airport, allegedly over money related dispute. Harrowing visuals making rounds of social media shows the group of young women relentlessly chasing the man, and thrashing him violently. The young man’s shirt is already torn and tattered. In a separate video of the same incident, another man can be seen holding the man down so that the group of women could beat him up.

According to an NDTV report, the victim was identified as Dinesh, an auto driver employed with a taxi company in Raipur called Rahul Travels. As per the reports, Dinesh had been working for the travel company, but never got salaries for the month of May and June 2022.

Recently, he approached the company’s office to collect the salary he is entitled to. However, as per his complaint, the employees at the office started to misbehave with him which resulted in an argument. In his complaint, Dinesh alleged that when he asked for the manager’s number, the group of women started thrashing and abusing him.

Earlier in July this year, a group of women in Indore were caught on camera thrashing a female Domino’s Pizza employee.

Lately, there have been several instances of men and women thrashing other people regardless of their gender or age. The instances get reported quickly thanks to social media platforms like Twitter, where people often tag relevant authorities and get the victim in the thrashing-like situation some justice.

Recently, a similar instance was reported from Raipur’s Swami Vivekananda International Airport. A bunch of women were caught on camera thrashing a man with belt and slippers. The man’s clothes were torn due to the mercilessly beaten by the women.

Also Read: Jodhpur Doctor Chains Dog to SUV, Drags It Around in the City, Booked after Outrage | Video

The video of the incident shows a group of women mercilessly thrashing a young man whose shirt is tattered and torn. A man, who appears to be a body guard, holds the man before he could flee, and the women continue with their thrashing. One woman gets her belt out and starts to beat the man up with it.

In a separate video, the women can be thrashing the man and a group of muscular men in blue t-shirt can be seen surrounding them, giving an impression of being working as bodyguards.

What is happening in the airport, where is the security of airport….? Really shameless some girls are beating one person freely…?

In @aairprairport , young women beat up the young man badly with a belt, slippers
Controversy escalated between boys and girls working together in Rahul Travels over asking for manager's number
#Raipur #airport #Chhattisgarh #GirlsFight #cgdailynews pic.twitter.com/Gx6AFyrUKk

According to reports, the man who was brutally thrashed was identified as Dinesh. Following the incident, both the parties filed complaint against each other. In his complaint, Dinesh mentioned that he works as an auto-driver for a travel company called Raul Travels. He alleged that despite working, he did not receive salary for the months of May and June this year.

When he reached the office of the travel company to get his salary back, the employees there started to misbehave with him, as per his allegations. On being asked for the manager’s contact information, the group of women started with their thrashing, Dinesh alleged.

According to a Dainik Bhaskar report, a complaint has been registered against Sonam, Preeti and Pooja, all of whom work for the travel company. Dinesh in his complaint also alleged that Preeti pulled out a pepper-spray and used it on him. When he lost his vision momentarily, the women started to thrash him.