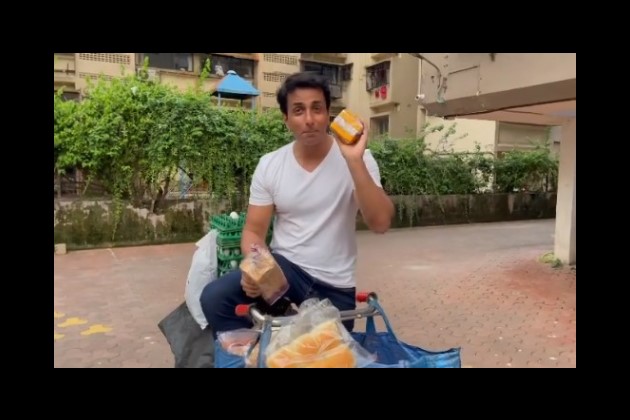 Actor turned humanitarian & philanthropist Sonu Sood is winning hearts of netizens by selling bread, eggs on bicycle in a bid to promote small businesses. In the video that’s going viral on social media platforms, Sood can be seen on the bicycle, sharing the prices of the food items he is selling and going on his way to sell it.

Contents hide
1. Details
2. “Who says malls are shut, this is the most important supermarket”
3. “Sonu Sood’s Supermarket is a hit”
4. Fans asks Sood to send Kane Williamson to pavilion, Sood replies

Dabanng actor Sonu Sood is often lauded by netizens and needy alike for his efforts in giving aid to those who need it the most. Sood started with his philanthropic efforts in 2020 during the first nationwide lockdown where he organized buses for migrants who were making way to their villages.

Since then, Sood is part of news for arranging essential COVID-19 related medicines, oxygen supply for the needy and other essential resources. The actor has been known for making use of his social media and regularly replies to those who post on his timeline with an urgent requirement.

“Who says malls are shut, this is the most important supermarket”

But this time, Sood took to social media to promote small businesses and subsequently gave his followers a reason to smile. Sitting atop a bicycle, Sood can be seen describing the food items he’s carrying with charm and confidence he’s known for.

-Sood can be seen saying.

“Sonu Sood’s Supermarket is a hit”

“Whoever wants it, give me the orders. Now it’s time to go for delivery. And one more thing, delivery charges are extra. So, let’s go with the Sonu Sood’s Supermarket. It’s hit, boss.”

Sonu concluded. In the caption of the video, Sood had written, “Free home delivery. 1 bread free with every 10 eggs”, and added support small business as a hashtag.

Known for giving his fans a reason to smile by his philanthropic gestures, Sood also takes to Twitter with his hilarious replies to certain requests and demands. Recently, a fan asked him to send New Zealand Test cricket team captain Kane Williamson back to the pavilion. To that, Sood had a hilarious reply that won the hearts of netizens.

The request was made in reference to the recently concluded World Test Championship where Kiwi captain Kate Williamson was playing against the Indian bowlers well. On this, a fan tagged Sood in a tweet and wrote, “Hello @SonuSood, please Williamson ko pavilion bhej do”.

Right after the tweet, Williamson coincidently got out on 49 runs and Sood replied saying, “हमारी टीम में ऐसे दिग्गज हैं जो खुद ही भेज देंगे। देखा, गया ना “(Our team has such outstanding players that they will dismiss him themsellves. See, he’s gone.)