Tesla Makes An Entry in India; Registered as a Private Ltd Company in Bengaluru

Fans of Tesla, rejoice! US electric vehicle giant Tesla finally makes an entry in the Indian market. Tesla Motors registered itself as a private limited company in Bengaluru.

Karnataka Chief Minister BS Yediyurappa took to Twitter to welcome Musk to India and in his state.  “Karnataka will lead India’s journey towards Green Mobility. Electric Vehicle Manufacturer Tesla will soon start its operations in India with an R&D unit in Bengaluru. I welcome Elon Musk to India and Karnataka and wish him all the very best,” tweeted Yediyurappa. 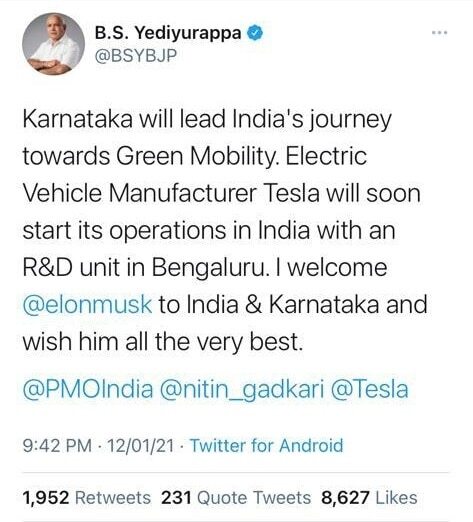 The US-based electric car manufacturer has set up a unit called Tesla India Motors and Energy Private Ltd in Bengaluru. According to the RoC(Registrar of Companies), the new entity will be classified as the subsidiary of its original foreign company. The company has also registered an office in Lavelle Road, which is a business district in Southern Bengaluru, with an authorized capital of Rs. 15 lakh and paid-up capital of Rs. 1 lakh.

Tesla has also given 3 people the seats of director in the newly registered company. The three directors named by Tesla are- Vibhav Taneja, Venkatrangam Sreeram and David Job Feinstein. These developments are enough to disrupt the auto market in India and to give fans of Tesla and Musk a reason to look forward to a cleaner and more fuel-efficient tomorrow.

The principal secretary of commerce & industries of Karnataka Gaurav Gupta said, “We have been interacting with Tesla for the last few months and it is happy news that they have decided to incorporate their company here. We have impressed upon them that Bengaluru is not only the technology capital but also the aerospace and space capital. For any kind of technology collaboration, it has the right kind of talent pool.”

Gupta also said that however Tesla wants to enter the Indian markets is “left to their judgement”. “Hopefully, this will lead to sales office, research and further developments as necessary,” he added.

There are other states that are in contention for being associated with Tesla Motor’s efforts to bring its vehicles to India. According to reports, Tesla is in talks with Maharashtra, Gujarat, Andhra Pradesh and Tamil Nadu.

It’s important to note that Tesla’s CEO Elon Musk, who recently became the wealthiest human in the world, enjoys a cult-like status in India. It remains to be seen whether his status can help in an increase in demand for Tesla’s products or not.

Meanwhile, after the news of Tesla registering itself as a company broke, Twitterati’s addressed the news in their own way: by sharing memes.

Imagine a Tesla at the Silk Road junction. #Teslaindia #Bengaluru

Earlier in late December 2020, Union road transport and highways minister Nitin Gadkari confirmed that Tesla will begin its operations in India in 2021. Gadkari said the company will first focus on sales and depending on the market’s response, will then get started with assembly and manufacturing.