To Give Exam, Andhra Woman Gets Carried on Shoulders of Brothers and Swim across Champavati River | Video 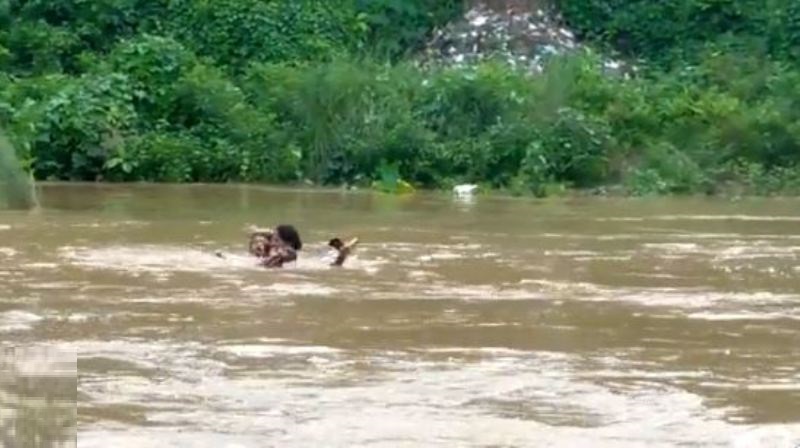 Showing unwavering determination, a woman in Andhra Pradesh was carried on the shoulders of her two brothers and then swam across the Champavati river to give exam. The video of the incident shows the woman swimming across the river and being carried by her two brothers as the unpredictable flow of the water continues to steadily increase.

21-year-old Taddi Kalavathi is a resident of a village in Andhra Pradesh’s Gajapathinagaram Mandal. An employee at a private company in Visakhapatnam, the 21-year-old woman came to her native Marrivalasa village earlier this week.

She had to leave her native village and go back to Vizag to give an exam scheduled for Friday. However, due to the ongoing incessant rain in the region, her village had completely lost the already-limited links to the nearby regions.

Determined to give her exam, she decided to swim across the Champavathi river, and find a vehicle that will take her to Visakhapatanam. The path was treacherous and full of dangers. However, Taddi decided to take the risk.

Fortune favours the brave, and Taddi received the support of her two brothers, who came forward and carried her on their shoulders. Meanwhile, Taddi was caught on wave fighting against the flow of the neck-deep water.

“Back in our day, we used to walk several kilometers & even swim across rivers just to attend schools!”.

We have all heard our grandparents and people from their generation looking fondly at their challenging lives. Recently, a 21-year-old woman in Andhra Pradesh did something similar and embodied unwavering determination. The Andhra Pradesh-based woman recently swam across a river, only to give an examination.

Employed at a private company in Vizag, 21-year-old Taddi Kalavathi had recently come to her native village called Marrivalasa in Andhra Pradesh’s Gajapathinagaram Mandal. On Friday, she was supposed to go back to Vizag and give an examination.

However, due to the incessant rainfall in her region, she realized that all the limited links to the nearby region had been submerged under water. The only way she could’ve done something was to swim the overflowing Champavathi river.

While many would have ditched their plan of giving an exam and would’ve hoped for “next time”, Taddi decided to swim across the river and reach through to the other side, and somehow find a vehicle that would take her to Vizag.

Her dangerous decision to swim across Champavathi river was not only approved, but received support. Taddi’s two brothers decided to extend their support in her pursuit to give an exam. What followed was a fight against all odds, where a single misstep and mistake could’ve caused a tragedy.

Visuals going viral shows the two brothers of Taddi carrying her on their shoulders as she swims across the neck-deep waters of the Champavathi river.

While it’s not reported yet whether Taddi reached her examination venue safely, we sure wish her good fortunes for more such endeavors.

Earlier, a woman from Bangladesh swam to India only to marry her boyfriend. The woman gave ‘saat samundar paar’ a new meaning as she crossed the wild and dangerous Sunderbans, swam for around an hour, and entered India, only to tie the knot with her husband. Krishna Mandal reportedly married Abhik Mandal in Kalighat Temple, Kolkata.

Unfortunately, the dreamy run of the couple was cut short by reality. Her fascinating story had spread like wildfire and had reached police, who arrested her for illegally entering the nation.