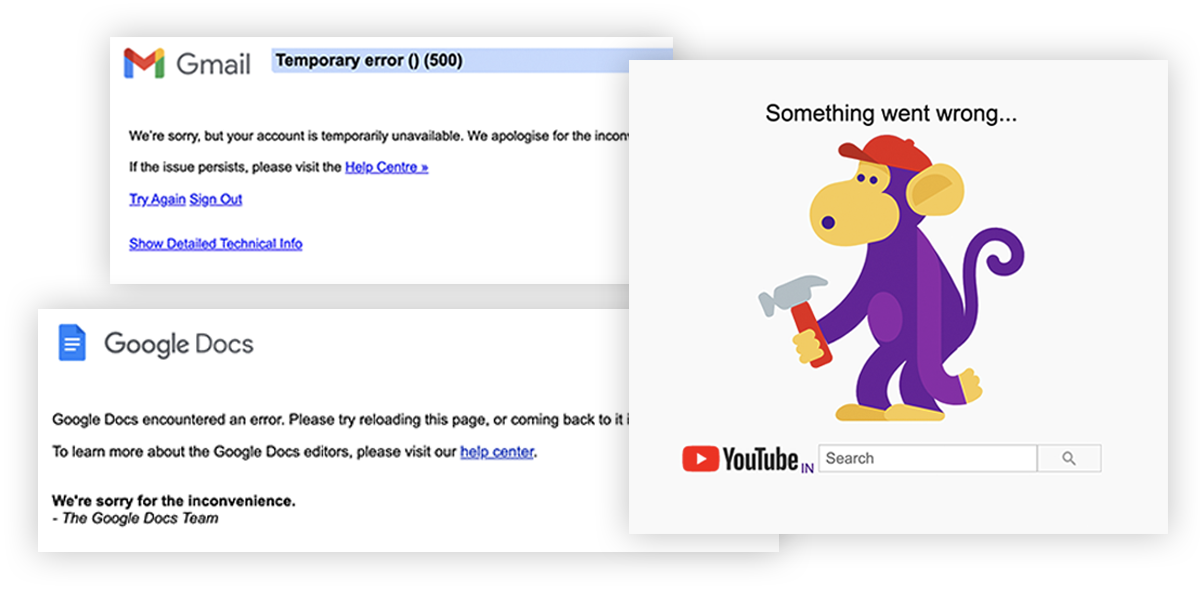 It seems Google has got the case of Monday blues as YouTube, Gmail, GDrive, and Google Docs suffered a massive outage on an international level.

Users across the internet flocked towards social media websites like Twitter and Instagram to confirm whether or not they are the only ones seeing an error page on the platforms mentioned above.

As the outage continued, the Twitteratis acknowledged the event in their special way by sharing rib-tickling memes.

We’ve compiled some of the funniest tweets that were posted moments after the outage.

It’s almost time for school and now @YouTube is down. I have an exam, let me at least watch YouTube man. #YouTubeDOWN pic.twitter.com/kpBhNOZ9PN

After you realise your WiFi is not down but YouTube #YouTubeDOWN pic.twitter.com/wwU3iNiUM9

#YouTubeDOWN
everybody and they mama running to see if youtube is actually down or if it’s just they wifi #YouTubeDOWN @YouTube pic.twitter.com/dI2t6SaM45

The day came. When you can’t even google what happened with google.

gmail is down, can’t really work so I thought I’ll take a break. opened youtube, but that too is down batao kya karu main marjau meri koi filling nahi hai

Within minutes of the outage, #YouTubeDOWN and #Gmail were trending internationally. At the time of writing this story, Google search appeared to be active without any issues.

It is not the first time Google suffered a major outage like this one. On June 2, 2019 due to Google Cloud problems number of services like Snapchat, Discord, Gmail, Youtube took a hit. It took the Search giant 4 hours to fix the issue. Although Google stated that it was just the East coast of US that the outage was noticed, there were people across Europe who claimed the outage had an effect on their land too.

With 2020 turning out to be an interesting year, it almost makes sense in a strange way that one of the most consistent and reliable internet service suffered an outage like this.