What would happen if we lost Amazon Rainforest to the Brazilian Forest Fire? It is severe than you think. 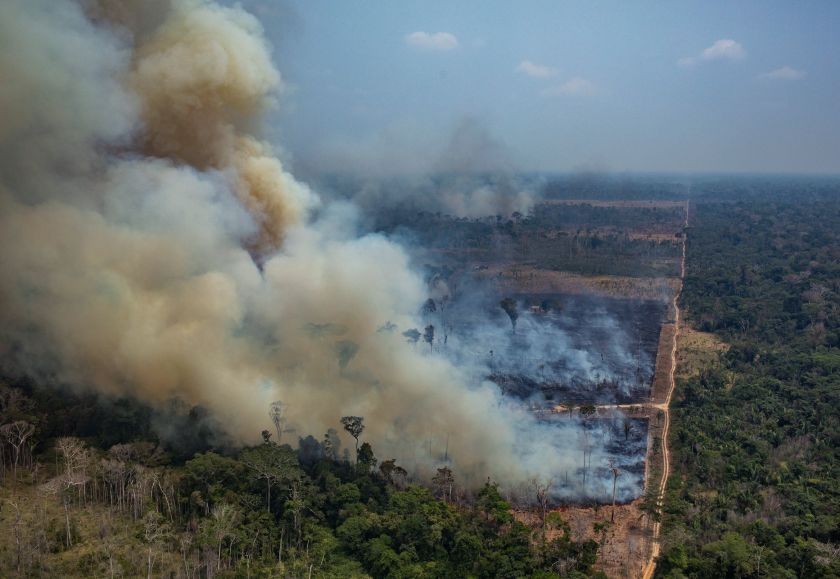 Recently, the reports of Amazon rainforest burning has raged people around the world. Amazon rainforest is the biggest forest in the world which covers most of America. Every year during the dry season, the farmers of the land burn their farms to sow new crops. However, this year, the fire went out of control and ended up rising to uncontrollable levels. As a result, the amazon kept burning for 4 consecutive weeks. The smoke generated from the burning of the forest was enough to be seen from space and covered a city in darkness, converting day into night.

But, what makes Amazon rainforest so important for all of us? Why the burning of the Amazon forest in particular enraged people. Well, the answer lies in the problems created by humans themselves. Amazon rainforest is the biggest forest cover on the earth which consumes around 5% of the world’s total CO2 emissions and generate oxygen, which is enough to satisfy 20 to 23% of the world’s oxygen requirement.

The ravaging fires of the region have escalated global concern about the impact of depleting Amazon on the planet’s climate and wildlife. The world’s survival with a devastated Amazon becomes questionable. Not only human civilization but a whopping 25% of global biodiversity resides in the Amazon rain forest, making it the biologically richest region on Earth.

As per the reports of Panthera, a group of an environmental activist, Amazon is a major contributor to the natural cycles required for the functioning of the Earth. It fulfils oxygen requirement, helps in rains, and prevents soil erosion and much more. If there were no Amazon, then the whole eco-system of the earth including animals, plants and humans will face severe consequences.

With the growing urbanization and industrialization, the world is continuously emitting greenhouse gases of which, Carbon-di-oxide is the most heat-trapping gas. Currently, the world produces around 40 billion tonnes of CO2 annually. Amazon rainforest is responsible for consuming 2 billion tonnes of total CO2 emissions in the world. Thus, Amazon curbs climate change and global warming by absorbing 5% of the total CO2 emitted by human activities.

As per Laura Schneider “The Amazon is the largest tract of continuous rainforest on the planet, and it plays a critical role in the (Earth’s) climate system.” Laura is a geographer at Rutgers University.

Well, that is only one way Amazon saves the earth by absorbing carbon dioxide, a heat-trapping gas that plays a significant role in global warming. Apart from this, as told by Daniel Nepstad, who is the director of the Earth Innovation Institute, Amazon encompasses a forest cover, which holds and stores around 100 billion tonnes of carbon in its trees and helps to keep 400 billion tons of Co2 from the atmosphere.

Amazon is a vast forest area, expanding largely across America and Europe. Every year, Forest fires take place in different regions of Amazon and the level varies from year to year and month to month. However, the level of forest-fire that have been recorded in August in the Brazilian Amazon is noticeable. The increase in large, intense and persistent fires along major roads in the central Brazilian Amazon can even be seen from space. The city Sao-Polo even got covered in the smoke of this fire so badly that it turned day into night.

There are nearly 77,000 fires across Brazil of which, half of the fire this year has been in the Amazon region. About 60% of that region is in Brazil. Apart from Brazil, the vast forest also spreads across parts of Bolivia, Colombia, Venezuela, Ecuador, French Guiana, Guyana, Peru and Suriname.

Not only Amazon absorbs the CO2, but it also evaporates water. Thus acting as a giant cooling system for the planet. “All of the water evaporated from Amazon forest trees absorbs energy when it evaporates – cooling the planet just as people are chilled by evaporating water when they are wet,” Nepstad said.

However, even if human beings find a way to somehow survive without the Amazon rainforest, millions of other animals & flora and fauna creatures will be rendered homeless without it. Amazon is home to more than 30,000 plant species; 2.5 million insects species; 2,500 kinds of fish; 1,500+ bird species; 550 reptile species; and 500 types of mammals.  This data is depicted by the Wildlife Conservation Society.

Speaking about the aquatic species, Carlos Durigan, the county’s director of the Wildlife Conservation Society, Brazil says “Iconic species like the jaguar, tapir, and pink river dolphin and harpy eagle are well known, but the basin contains 10-12% of all the species on the planet. It is the world’s largest freshwater system, where over 2,500 species of fish thrive.”

Considering the humans, Amazon is home to 400 to 500 indigenous tribes. Once the Amazon is gone, they will have nowhere to go.

As told by Schneider Amazon rainforest is home to the highest biodiversity on Earth. It houses various indigenous communities for centuries who will be homeless without the Amazon. However, looking at the current situation, WWF (World Wildlife Fund) has estimated that around 17% of the total Brazilian Amazon has already been destroyed due to forest fires.

Further, as stated by WWF, if the forest fire is not stopped soon from destroying the forest, then the biggest source of oxygen on the planet will turn into the biggest carbon-emitting chimney. This will escalate the process of climate change at an uncontrollable level.

Amazon rain forest is also responsible for bringing rains in nearby countries and providing fertile land for farming. However, the fire may land the farmers in trouble because the burnt up forest will not only be useless for rain conservation but will make land infertile as well.

There are thousands of plant species in the Amazon which act as a raw material for many diseases. These rare species of plants will also be lost completely, once the forest gets erased from the planet.

Where the world calls the Amazon rainforest like the lungs of the planet, Schneider has some different views on the topic. On being asked upon whether Amazon rainforest can be metaphorically said as the “lungs air conditioner of the Earth”?

She says that she wouldn’t use either of the metaphors i.e. lungs or air conditioner because forest forests play significant role in the climate system including cooling the Earth or absorbing carbon. Forest ecology is too complex to be captured in one metaphor.

We sincerely hope that Amazon rainforest fire is cured soon and the authorities control the situation, otherwise the outcome will be disastrous.